Besides being known for its transparent and immutable qualities — which provides reassurance and safety to all users — Blockchain technology is also acknowledged for giving fair and equal conditions to all those who choose to adopt it, and that is one of the main reasons why businesses, are striving to apply this new technology to different areas.

The fact is that when most think of Blockchain technology, they immediately link it to the world of finances — and sure, it is the technology that supports cryptocurrencies, such as Bitcoin, Ethereum and other cryptos, like AppCoins — but due to its disruptive nature, blockchain technology is now being used in all sorts of different industries, such as the gaming industry. We, for one, can certainly understand why.

Blockchain Technology And The Gaming Industry — The Start Of The Revolution?

Unifying both worlds is something that makes much sense — after all, gamers are already very much familiarized with the concept of buying gems, weapons and other virtual goods to power-up their characters and beat fellow gamer adversaries. These in-app purchases are mostly made via credit card or fiat currency; however, this is not always possible for many users from around the world, especially the ones from emerging markets, and that is one of the main reasons why Aptoide — one of the largest independent Android app stores in the world — chose to develop a blockchain-based protocol.

The Aptoide app store has been catering to over 300 million active users for the past 7 years, and during that time, it discovered that the current state did not benefit the developers or the user as much as it should. The bottom line is that app discovery could be better, and financial transactions, such as advertising and in-app purchases, could be more efficient. So, in order to respond to the needs of the players of the apps ecosystem, Aptoide decided to launch the AppCoins Protocol.

The AppCoins Protocol seeks to unlock the world of in-app purchases to billions of users, especially those who don’t have access to traditional payment methods. One of the ways to achieve that was by developing the Proof-of-Attention (PoA) concept.

On top of that, while on the one hand this introduces new users and includes them in the app economy, on the other hand, it guarantees developers that the user acquisition campaigns are working and that they are being provided with significant revenue. This creates a circular economy where since a higher share of the advertising and IAP revenue is kept within the app ecosystem, more value is rooted back into the app economy. In short, everyone involved — from developers to users to app stores and OEM’s — are benefited as they receive a fair share of revenue, which is something that did not happen before.

Developers and Blockchain Technology: A Match Made in Heaven

As Developers invest in blockchain technology, they’ll be entering a world where transparency and equitability are kings, which will result in a more trustworthy and private environment where there are no intermediaries, and as such, developers are left with a better revenue share for their hard work.

Take the AppCoins Protocol for instances, it is the first project aiming to promote a circular economy between users and developers, and in order to achieve that, it launched Catappult — a safe and secure distribution platform through which developers can reach hundreds of millions of users in top Android app stores with a single APK and a single account.

Besides allowing developers to spend more time creating great games and apps — instead of having to worry about other technical issues, such as distribution — Catappult also makes sure that millions of users have access to games and apps where they can actually make in-app purchases without having to own a credit card – improving their user experience.

Besides having the opportunity to join Catappult, by adopting the AppCoins Protocol, developers will also be able to create user acquisition campaigns which include three main advantages: no risk of fraud; more incentivized users to open and engage with their apps (since according to the AppCoins PoA system they have to spend at least two minutes of attention on the app to earn AppCoins Credits); and finally, the fact that these AppCoins Credits won’t leave their ecosystem — which means they can’t be converted into fiat currency, which, again, will promote a circular economy within the app stores ecosystem.

Is the Disruption of Blockchain in the Gaming Industry a Good Thing?

We believe that blockchain technology and the gaming industry complement each other, and will certainly benefit users, developers and app stores by working together. That is precisely what we are working towards — a world where all parties involved openly speak the same language.

Programs such as The Users Incentives Program are actively contributing to the wide-spread of the AppCoins Protocol. Moreover, the Catappult console is breaking new ground and disrupting the gaming industry by promoting the adoption of the protocol within the developer community, all while allowing them to monetize their apps safely, and in a transparent way through blockchain technology. 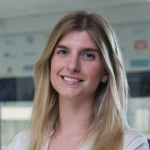 With a background in content marketing, Filipa’s aim is to create unique, high-quality, and relevant content that is engaging and useful. Give her a laptop and a topic, and she’s ready to go!